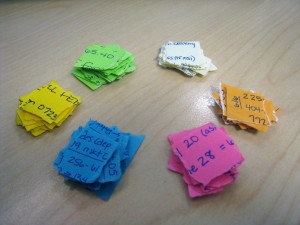 A long time ago — well, five years, but that is a long time in Internet years — before the SaaS market became a breeding ground for online task management, time tracking, and project management tools, we had a working prototype of our own app at Pelago. Being both a web design and development firm, we required more than just a simple task manager. We needed an issue tracker to report, update, and resolve bugs with the web-based applications we were building for our clients. And because we billed hourly for our services, we need to know how long bugs were taking to resolve. The few online tools that existed at the time provided rudimentary task management and were absent quality time tracking capabilities. That was when we decided to fill this niche with our own product, Intervals, a web-based time tracking, task management, and project management tool.

Intervals was launched into beta the first month of 2006 and was officially launched in June of 2006. While the application has evolved over the last few years, the core focus is still on managing tasks from an issue tracking angle, while tracking the time it takes to get things done. Here are some reasons why we’ve taken this approach.

You say issue, I say task, she says bug

Whatever you want to call it or however you want to differentiate them, an issue, task, and bug have a lot of attributes in common. They are all items we put on a list that require us to take action. They can all be applicable in web design, web development, IT, and other technical service companies. And it is always helpful to know how long they took to complete, regardless of their nature, so that the client can be kept up-to-date on their project. So why did we tackle task management and time tracking from the perspective of an issue tracking application? Partly because of their similarities, but mostly because of their differences. When working in the context of issue management, both tasks and bugs take on more flexibility, making a a web-based tool, like Intervals, far more powerful than your basic task manager.

When tracking issues and bugs it is vitally important for the team handling them to fully understand the urgency of the request. For example, both IT companies and web development agencies will often times handle urgent requests that need to be completed in the next few minutes. Assigning priority to the task let’s them know how soon they need to address the issue, and whether or not they can finish eating lunch.
Status is another important attribute of a task. It tells the team what action needs to be taken next. Common statuses used for web-based project management applications like Intervals are Open, Verify & Close, Deferred, Needs Assistance, and Closed. These task statuses can very in each organization and are primarily used to address each step of an issue’s life cycle.

The ability for a task to have an owner and for that owner to assign a task to a resource, or to multiple resources, is another way an issue is differentiated from a task. Having multiple eyes focused on a task increases its chances of being completed correctly and on time. It also gives the task owner, often times the project manager, the ability to see how much time the task is taking to complete and step in if necessary. Different scenarios might be encouraging the assignees to track their time more accurately, or giving them a little push if they are taking too much time.

Knowing when a task starts and ends is another powerful differentiator for managing tasks, issues, and bugs. Coupled with priority, assignees can easily deduce which tasks they should be working on next, and where they should be focusing their efforts throughout the week. Tasks stamped with today’s due date and elevated to the highest priority obviously need to be addressed ASAP, while tasks stamped with a start date one week out and demoted to a mid level priority can be ignored for the time being. Without scheduling, tasks become much more difficult to prioritize and address in a timely manner, and that is not good for a web development or IT company used to an issue tracking environment.

Perhaps the most powerful difference of treating a task like an issue and tracking time against it is the data that is accumulated and used for building powerful reports. The ability to track task and time data and learn from it will help make any company more efficient. Having worked in this environment for years now at Pelago, we’ve been able to streamline our estimating and development processes to the point they are almost automated. Addressing and tracking tasks like issues gives us data on who completed what and how long it took them. It also tells us how much workload a project manager has pushed through, which clients request the most higher priority issues, and where to go looking for information on similar bugs or issues that may pop up in the future.