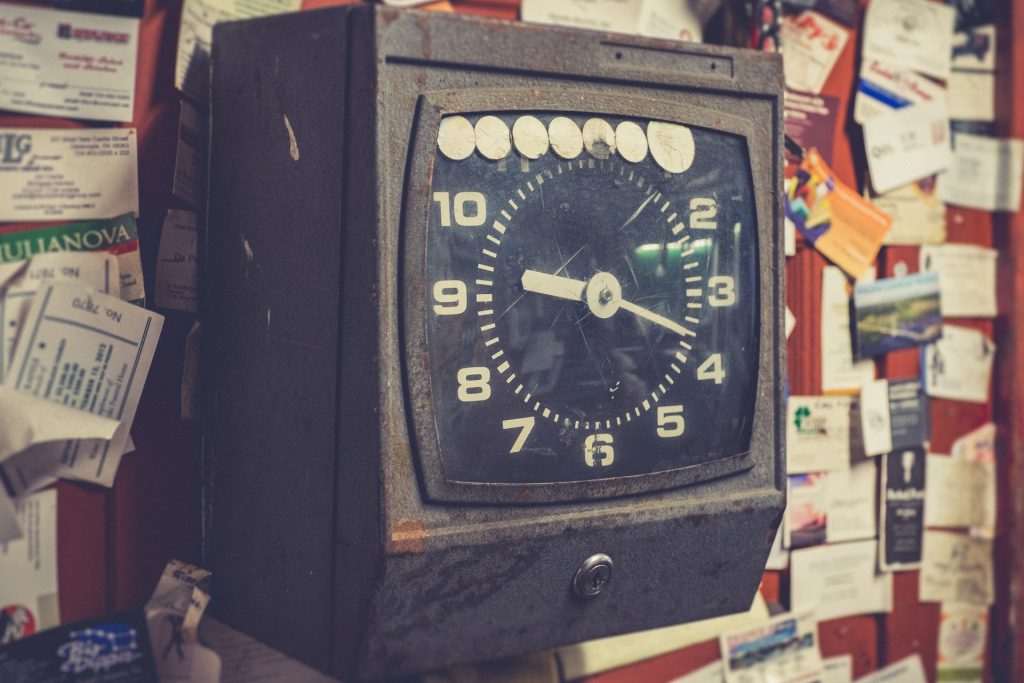 In 2006 we launched Intervals, our flagship time tracking application. The Software as a Service (SaaS) landscape was just beginning to take shape as more and more companies embraced doing work online. My personal journey as a co-founder, however, began much earlier, all the way back in 1990, when at 15 years old I got my first job as a dish washer at a pizza restaurant. In the decades since I have used several different methods for keeping track of time. What follows here is a brief history of time tracking, based on my experience both using and developing time tracking tools, and some thoughts on where things are headed next.

My first few jobs required me to punch in and out of each shift using a time clock mounted to the wall. The entire record of my work week was contained in several ink stampings cascading down that oversized bookmark of a time card. It was mostly tamper-proof but — because everyone’s time card sat in the same shelf on the wall where it could easily go missing — also highly prone to data loss. And the process of tallying up each employee’s time for payroll was a laborious and tedious process.

At some point in the early 90s, when I was working at Pizza Hut, the time clock transitioned from analog to digital and we’d punch in and out on the same dumb terminal we used to place phone-in pizza orders. The digital punch card was definitely an improvement, but had it’s drawbacks. The interface was monochromatic and text based, and was harder for some to use if they weren’t familar with computers.

Eventually, I moved on from dishwashing and pizza cooking and started working as a screenprinter. There I was introduced to paper timesheets. And I use that term very loosely. Often times it was just a notebook where you kept a tally of the days and hours worked. And in many ways it was a step backwards from the punch card system. Like punch cards, my hours still had to be tallied up each payday. But now I also had to manually keep track of my time.

I worked as a screenprinter through most of my college years, but closer to graduation I found work at a computer lab on campus. As a part time employee it was my responsibility to keep track of my time, so I stuck with paper timesheets. It was a sheet of paper that I kept in a folder at the lab and would turn in at the end of each pay period. You would think that a computer science student learning how to code would have built something better, but, it was the dawn of CGI and my interests were focused on design and animation. Paper timesheets would have to do.

When we started Pelago in 2000 our revenue was based 100% on billing clients and so our time tracking methodologies had to be efficient and accurate. To that end we took a hybrid approach and combined paper timesheets and Excel spreadsheets. Individuals on our team would fill out a paper timesheet each day and then we would enter it all into Excel once a week.

This approach was neither efficient nor accurate. Prone to human error, hours went missing and our picture of where our time was going was incomplete. And, we spent way too much time entering the data into Excel. By the time we found errors in our billing the project was too far in the past to do anything about it.

Again, you would think that a web development agency would have built something better. And we eventually would, just not yet. As any professional services agency is aware, you only get paid when you are working. Any time spent on building an internal time tracking system would be time we weren’t getting paid. It’s hard to balance ambition and responsibility when there are bills to pay and mouths to feed.

We finally made the decision to move on from Excel spreadsheets and began looking into both open source and proprietary software for tracking our time. We experimented with several and reluctantly settled on one of the open source options. All of the candidates, however, had the same issues. They were either clunky or expensive — often times both — or fell short of our needs. The solution we did choose we had to retrofit with a few features it was missing.

The software worked despite it’s being clunky, but we ultimately decided to abandon it and build our own. Customizing and maintaining software that was written mostly by someone else was more work than we had expected. And we had to host it on our own servers. If we were going to do that, we wanted it to be our code. Open source and proprietary solutions can work if you don’t expect to tinker with the software and you don’t mind hosting it on your own servers.

Many of the companies that we consult with have come to a crossroads in their business where they must weigh the pros and cons of building their own software versus paying for it. At the time we decided to build our own in 2002 there weren’t nearly as many paid options as there are today. And the few there were did not have the integration between task management and time tracking that we needed.

Billable client work was still our only source of revenue so we didn’t want to spend too much time building our own time tracking software. We worked on it when time allowed and eventually scrapped together a minimal, yet impressive, solution. Maintaining the software and hosting it on our own servers was worth the tradeoff of having time tracking software that did exactly what we needed it to do.

I do not recommend building your own time tracking software. Today’s software landscape is bountiful, to say the least. Unless the problem you are trying to solve is truly unique, it’s going to make more sense to buy software than to build it. The amount of time and effort required to build and maintain a custom solution far outweighs most monthly software fees.

Software as a Service (SaaS)

Building our own software required us to solve a lot of workflow problems that plagued our agency. We realized that the problems we had been solving were not unique to us, and in fact, were quite common in professional services agencies that struggle with time tracking. And, that there was an opportunity to apply what we learned and build something even better that could help other agencies like ours solve the same problems.

With this in mind, we rebuilt our time tracking software from the ground up. When we launched Intervals in June of 2006 we became both a consumer and provider of online software. Today, we still use Intervals to track our time. But instead of client work, we are tracking and managing the development work that goes into evolving and supporting Intervals.

SaaS is a great option for tracking time for several reasons — the costs are low, the vendor is responsible for the infrastructure, and you can use it from anywhere using any device. And those reasons are just a few from a longer list of benefits.

SaaS isn’t going anywhere any time soon. The barrier to entry has become increasingly lower as software development frameworks and no code movements make it easier to build an application. Just do a google search for time tracking software and you’ll see there are thousands to choose from. We’ll continue to see new software launching into the time tracking space on what seems like a monthly basis.

That said, individual SaaS platforms will have to evolve to stay relevant. Business needs are becoming more complex and to match their needs software has to become more comprehensive and holistic. Time tracking software will have to check more than one box on the list of business needs — and handle business workflows around task management, invoicing, reporting, and more.

Time tracking software (and SaaS offerings in general) will start adding more intelligence to their platforms. With artificial intelligence becoming more of a commodity, expect to see software that not only helps track and manage your time, but also interprets your data, translating it into more forward-looking and meaningful reports and dashboards. Imagine time tracking software that doesn’t just answer your questions, but figures out which questions you should be asking in the first place.

The only question I have is how soon will we get there?