In the several years I have attended SXSWi the signal to noise ratio has only gotten worse. Corporate takeovers of every corner bar and restaurant, over-hyped launches, and infinitely long lines for a free taco; they are drowning out the voice of the individuals truly striving to be innovative.

I was pleasantly surprised this year to see one of the oldest analog technologies in history, the bicycle, being used as a catalyst for innovation, communication, and new business ideas. Below are some of the bicycle related highlights from the 2013 SXSW Interactive Festival, all great examples of how the lowly bicycle is truly making a comeback. 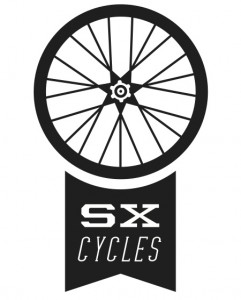 Austin, Texas, is swarmed with people and cars during SXSW, making it challenging to traverse the city on foot or by car. The pedicab business bustles, taxiing attendees to their next panel. And now there are bikes in the mix. Lots of them.

SXCycles is a recent program at SXSW offering free bicycle rentals to attendees. Grab a bike and go. Pedal all around town for the day and drop it off before you head to bed. Now you can make that beer run out to Whole Foods on Lamar or join the Mobile Social starting out at Mellow Johnny’s on Nueces. And with a bicycle, you can finally attend those panels on the other side of the river.

The Raspberry Pi is taking over the DIY market by storm. It’s a Linux computer the size of a credit card with USB ports, HDMI out, and a GPIO (General Purpose Input Output). If you’ve ever wanted to build your own tech prototype, the Raspberry Pi makes it much easier to do so.

Matt Richardson, a writer for MAKE magazine, showed us to what ends the Raspberry Pi can match our imagination. He took the idea of the bike headlight and turned it into a miniature projector that displays your current rate of speed.

The idea is so simple it makes me wonder “why didn’t I think of that?” But as I’ve said before, ideas are worthless unless executed, and executed well. And this headlight prototype proves that. The rate of speed is rendered by the absence of light inside the projected circle. As you go faster, the number increases.

The recreational applications are plenty enough to spawn a whole new market of bike headlights that display everything from rate of speed to calories burned, even directional imagery from a GPS telling you when and where to make your next turn.

Lola, a product design agency in Madrid, presented one of their sidecar projects called Bicycled Bikes. This small creative group has found a way to build bicycles from scrapped cars. The idea itself may not seem like much, but the execution is impeccable.

Steel from scrapped cars is melted down to make the bicycle frame. The leather for the seat and handlebars are salvaged from the car interior. Turn signals are transformed into tail lights. And car handles are re-purposed for quick release levers. Toss in your favorite gruppo and you are left with a truly unique and beautiful bicycle.

The bicycles are a result of Lola Makes, a sidecar project designed to explore new ideas from the different creative minds at Lola. They already have 3,000 pre-orders, so get yours in now. 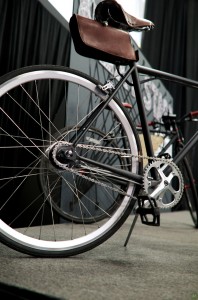 Electric bikes with motors on them haven’t really caught on in the States. This is likely due to their being bulky, heavy, and just plain ugly. We’ve always put form before function with our gadgets (i.e. iPhone), why should our choice of bicycle be any different?

Fortunately, there are some talented product designers creating electric motorized bicycle prototypes that are beautiful and utilitarian. Mission Workshop Sutro is one such design group currently working on a fleet of electric bicycles to be used by a San Francisco bicycle touring company. If there is any place I’d want an extra little push, it would be on the hills of San Francisco.

These custom designed electric motorized bicycles utilize a battery pack disguised as a saddle bag and a front hub motor. Matching this up to an internal 7 speed rear hub the bike provides just enough boost to get you going, without anyone else knowing you are riding an electric bike.

These are just a few examples of how technology is scaling and making it possible for bicycles to be a platform for new business ideas. At SXSWi we tend to focus so much on app design and development that we neglect hardware’s ability to transform marketplaces. Can’t wait to see what SXSWi comes up with next year.