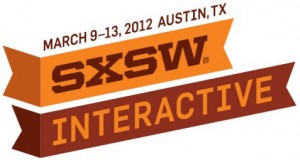 South by Southwest Interactive, popularly known as SXSWi, is an annual mind-warping interactive festival held in Austin, Texas. For five days, an overwhelming number of web designers, developers, marketers, and more, descend upon the convention center and surrounding environs to attend panels, network, and enjoy great food and drink. It’s almost guaranteed to be a great time for anyone who wants to attend, especially if you go with friends and co-workers.

This year the Intervals team decided to forego one afternoon of panels, speakers and keynotes to participate in the Lego Mindstorms Rumble, held at the Google Village Developer’s location on Rainey Street. Thirteen teams put forth their best efforts to build the best robot and win some prizes. Our own team, the Pelagonians, built a robot inspired by Wall-e, and ended up winning some prizes. Here’s how it went down…

Holed up for the afternoon at Icenhauer’s, each team was given a brand new Lego Mindstorms set to work with and a Google Android tablet for driving the robot. There was plenty of pizza, salad, and hot dogs to keep the teams fueled during the robot development phase. During the competition, Google and Lego gave out free drinks to everyone, which certainly helped loosen up us geeks. There were several rounds of good, clean robot racing. And after the competition was over, Lego donated the kits to charity and Google gave away the tablets as prizes. That’s the Lego Mindstorms Rumble, in a nutshell. 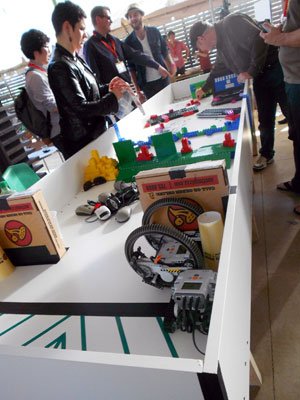 Developers, by nature, are an opinionated bunch. Agreeing on how to build the best robot is more difficult than one would think. First, we had to sift through the hundreds of ideas we were coming up with while brainstorming. Once we got everyone grounded in reality and realizing we only had a few hours to pull this off, there were different ideas on how to build the chassis, the wheels, the width, height, clearance, and on and on. Fortunately, we’ve been working together as a team for so many years now it made the process relatively easy. It also helps that we have a stellar product manager who knows how to keep us on track, who got us out of our own heads and onto the table, building something, reminding us that our ideas were worthless unless they were executed.

We took an agile approach to developing our robot — build it, test it, get feedback, improve it, rinse, repeat. To get started, we filtered through the list of ideas, reached a consensus, and began building.  Our first task was to build a prototype that could easily navigate the floor of the bar. Once we had a working model, we took it to the obstacle course, which was still under construction, to test it out and begin iterating over the design. Each phase helped us throw out the bad ideas and implement the good ones, and helped us congeal more as a team. When it came time to compete we had a bot we were all 100% proud to have built. 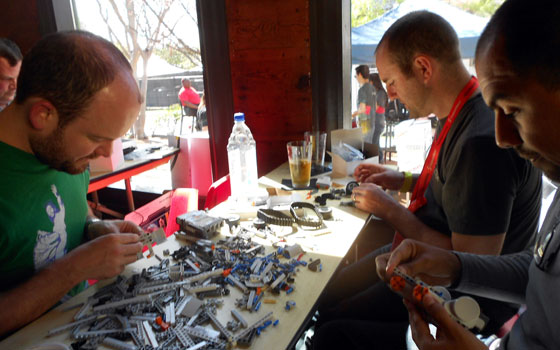 Our first design got caught up on its undercarriage, it’s wheels spinning freely in the air. And the rear wheel broke off. We returned to our workbench to implement our first round of findings. We increased the clearance and strengthened the back wheel.

The second round of testing proved more successful, but we still had a little trouble climbing over obstacles. And, according to the rules and regulations, our robot was a little too long to fit inside the starting box. Back to the workbench once more, we brainstormed ideas on how to improve the climbing capabilities of the front wheels. Our solution was to attach a paddle-like piece on the outside of each wheel to help lift it up and over obstacles. As for the rear wheel, we just shortened the tail structure.

Our last test on the course proved successful. We were able to race through it quickly and easily. We went back to our workbench to make some minor tweaks and add some flare, while the judges completed construction of the obstacle course.

We made it on CNET! Click on the screenshot to the right to see our photo and others from SXSW 2012.

Dubbed “Wall-e” and complete with a small plant from the front lawn of the bar, our robot entered the competition with twelve others. The first round of competition was the style round, where we took second place! Then the competition got serious, with some bracket-style single round elimination.

At the start of the first round we made the stark realization that the course had changed, making our robot too wide to fit through the finishing gate. Our strategy quickly became one of “let’s ram it and see if we can get over it.” After three failed attempts to get through a pile of lego bricks secured with hot glue, we were announced the winners by technicality. Although we couldn’t get through the narrow gate to the finish line, the other team couldn’t make it much farther than the starting line (they did, however, go on to win first place for crowd favorite with their pod racer inspired bot).

For the second round we went up against a team from San Luis Obispo, from my very own alma mater, Cal Poly, and were quickly and easily defeated by their slow and steady tank-bot. Having been eliminated in the second round, we retired to the bar to watch the rest of the competition on the big screen TV — and play Connect Four. 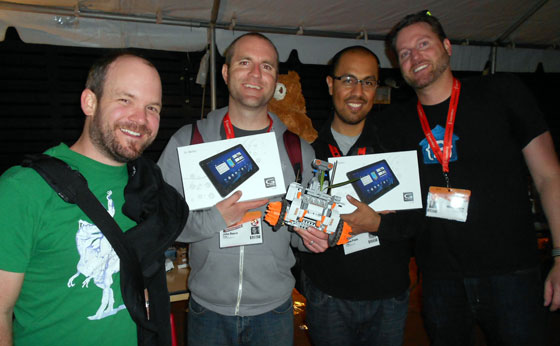 There were three categories: style, competition, and crowd favorite. Our Wall-e themed bot placed second in the style category and our entire team was awarded T-Mobile G-Slate Android tablets! It was definitely worth an afternoon of collaborating with co-workers and hanging out with fellow geeks talking about robots and Lego. And we got to meet some really great folks from Lego, Google, and other companies participating in the competition. 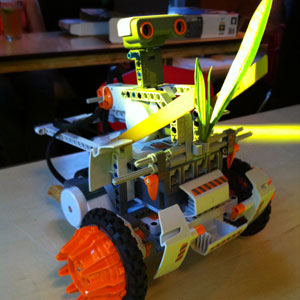 I’ve been a web developer for 19 years. In that time I’ve worked with a lot of other web developers. We are engineers who interact with lines of code and pixels, and like other engineers, we can be opinionated and difficult to work with. I learned a long time ago that for a project to be successful you have to put aside your own agenda and put the project first, you have to be willing to make concessions and compromises. Team building exercises underscore the importance of working in symbiosis with others. It has to be give and take. If anyone tries to dominate the group, the project suffers. If anyone becomes apathetic, the project suffers. The most successful teams will be those who’s members find the right balance between apathy and domination.

Building a bot was an exceptional team bonding exercise.  If you ask me, it’s better then pushing each other up and over a wall, swinging on ropes, or bouncing objects in the air with a parachute. When it comes to web developers, bonding needs to happen more on an intellectual level than a physical one. The obstacles we face as a team are conflicts in ideas and methodologies. We didn’t really need to help one another put the Lego pieces together. The real challenge we had to overcome was “how” to put them together. When a team can learn to quickly mobilize and hash out “how” something should be built, and then actually build it, they will be an efficient and successful team.

Eva says… Check out more of our photos from SXSW on Flickr!