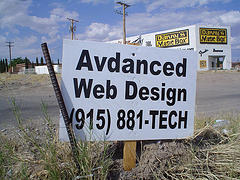 The Web, as we know it today, has advanced a considerable amount from it’s original incarnation. HTML hasn’t changed as much as the web browser, and web designer and developers have advocated and implemented higher standards in their work. From CSS improvements to better use of semantic HTML, the Web has (mostly) become a better online environment for both designers, developers and those who casually and professionally use the Web every day.

It wasn’t always this way. It used to be the Web was used primarily for collecting and sharing information. Web-based applications were in the minority, and even then they weren’t very good. To illustrate just how far we’ve come in web design and development, here is a collection of ‘best-practice’ tips from the 1990s, before the wild west of the Web was tamed and us settlers had a whole different way of building Web sites.

Validation was not an issue. Why? Because it was not possible to have a site that validated and looked the way we wanted it to in every browser. And faced with this predicament, we ignored what we’d been taught in design school and went with our designer’s instinct — function follows form. Besides, no one was really pushing the issue because the Web was still in its infancy. We all knew it was going to explode at some point, but we didn’t know how.

The four horsemen of the <body> element

Every web site we developed started out with the same four parameters in the <body> tag — LEFTMARGIN, TOPMARGIN, MARGINWIDTH, MARGINHEIGHT. It was the only way to make sure the margins around the Web page worked in every browser. CSS existed, but browser support was fickle, and this just worked.

The <table> tag and it’s ilk were your most used tool. Throw in a transparent GIF and no layout was too challenging. Any layout, no matter how rigid, could be designed and developed on the Web by using empty <td> elements containing a 1×1 pixel transparent GIF, resized to whatever size the margin needed to be. The table HTML tag was synonymous with a grid layout, not tabular data. And there were great apps out, like NetObjects Fusion, that made designing and developing Web sites in this manner a no-brainer. Today we see Web sites implementing tables mostly for tabular data and utilizing all parts of the table specification — head, body, and foot.

Everything from headlines to captions could be accomplished by nesting the items inside the <font> tag. Sure, we had to copy and paste the <font> tag repeatedly inside of every table cell that contained text, but it gave us more control of text display in the Web browser.

The <font> tag only gave us seven options. The elaborate comps we had designed in Photoshop, however, had more variations in text. It also had navigation text that changed color when you moused over it, and headlines branded with a similar non-standard typeface. So we cut our Photoshop text into several tiny pieces and saved each one as a GIF image that could be easily read by a human, but was invisible to search engines and screen readers. And we didn’t seem to mind maintaining Web sites that used graphical text. We just kept a PSD file laying around that we could open up, edit the copy, cut, paste, save as, and upload.

We’ve come a long way since the 1990s, a time when function followed form, when we treated the Web much like the wild west, a world with it’s own rules, many of which we got to make up ourselves. Thankfully, Web browsers, along with HTML and CSS standards, have improved. And the collective knowledge of today’s Web designers and developers have been leaders in making that happen, advocating for a better Web, where finally, form follows function. We’ve learned to work inside the limitations of the Web browser, recognizing it as an evolving medium where the classic rules of good graphic design still apply. In 2001, Jeffrey Zeldman wrote a great article about the state of Web design and development and where we were headed.

The separation of style from content is at ALA today, but tomorrow, or the day after, it will be at all sites. Far from seeming revolutionary, difficult, dangerous, or non-user-friendly, it will simply be the way the medium functions. It is, after all, the way the web was always meant to work.
— Jeffrey Zeldman, 2001

For more information on web standards, check out the Web Standards Project, a “grassroots coalition fighting for standards which ensure simple, affordable access to web technologies for all.”

I’ve only mentioned a few of the web design and development methods common in the 1990s. Please chime in and comment on your experiences.