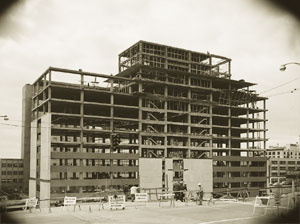 Web designers and web developers are tinkerers by nature. We love to fine-tune our creative ideas until they are somewhere close to perfection, despite our definition of perfection being in a constant state of flux. If our web site design does begin to approximate perfection, the inevitable happens. We come up with 101 reasons why we need to redesign our web site — good and compelling reasons why we should throw the old web site away and redesign, redevelop and relaunch a shinier and better web site in its place. I am telling you to ignore these inclinations. Yes, some web sites do need to be thrown out and redesigned, but most do not. To elaborate on the “why”, I’ve come up with five very good reasons NOT to redesign your web site.

1. No one looks at your web site as much as you do

Your web site gets a lot of visitors, but not a whole lot of repeat visitors. We look at our web site more often than anyone else, and we should if we are going to keep it up-to-date and bug-free. Web designers, however, are extremely sensitive to trend fluctuations and want to keep things visually fresh. When we look at something for too long it loses its appeal. The web site becomes tired in our eyes. Resist this first and powerful urge to begin a redesign by reminding yourself that a majority of your audience is seeing a different web site than you are. The web site, to your audience, is a transparent tool for delivering content; there is no blue ribbon with the web designer’s name on it.

2. You have higher priorities

A web site redesign is not a one person job. Any web site in production today likely has a small team of web designers, developers, copywriters, project managers, SEO specialists and system administrators involved in maintaining and operating it. A web site redesign is going to require the entire team to be on the same page in regards to template design, copy, server infrastructure, and any other factors that may affect the project. If the redesign is incorporating a new technology, your team will have to learn this new technology. You will need a compelling reason to redesign a web site before you can expect everyone to buy in and make it a priority. They are likely preoccupied with increasing web site response times, improving Google placement, and fixing bugs on the current web site. And what about your priorities? For example, driving more traffic to your web site is going to be better for business than a redesign. Make sure your redesign isn’t just an excuse to avoid higher priority, less exciting responsibilities.

3. Newer technology and trends will not solve your problems

The web is cranking out new frameworks and new tools for rapidly designing and developing web sites every week. And a lot of those new frameworks and tools are pretty sweet. I’ve heard many web designers and developers, myself included, justifying a redesign on the fact that framework X has a newer and more active community behind it than our current framework Y. The problem with this reasoning is that your framework, too, is still active and works just fine. It’s not broken or defunct. It’s just not the cool kid on the block anymore. The grass is always greener on the other side of the web, and web designers and developers are often quick to cite a new technology or trend as the solution to all our problems. And what you think are problems with your current web site are only going to be replaced by problems pertaining to the new technology. Stay with what works and you will save a lot of time in the long run. Otherwise, that new, cool framework you are adopting will likely become usurped shortly after you launch your web site redesign and you’ll start the chase all over again.

4. It will take a lot longer than you think

A web site redesign is going to take at least three times longer then you think it will. Even if you think you’ve accounted for it to take longer, it’s going to take three times longer than that. Once you start reworking the web site and all its images, templates, code and third-party apps, Alice’s rabbit hole will seem like a great vacation destination. Everything you didn’t account for, which will be a lot, will pop up and bog down your redesign. Web sites are much more complex then ever and usually have a database and a few third-party open source projects lurking under the hood. During the redesign process they will rise up and wreak havoc on the entire design and development team, consuming precious time and tripling your time estimates.

5. Your SEO rankings will take a shovel to the head

Unless you are painstakingly thorough during the redesign and redevelopment process, your SEO rankings are going to take a hit. Google favors content that has been around for a long time, as its had more time to collect inbound links and establish authority. You have the option of using redirect rules to let Google know that your web site pages have moved around from one place to another, but that doesn’t change the fact that your content and the way it is structured will be changing. If you have invested a lot of time into tuning your web site to score high on Google, consider how much time you will spend again trying to interpret and apply Google’s voodoo after the redesign is complete. A redesign could easily set you back a year in your SEO efforts. Try explaining why a redesign is more important than incoming traffic to the upper ups.

So… I’m stuck with my current web site design?

No. Web site designs can evolve. The creative process is an iterative one and the web is the perfect medium for exploring new ideas. If you want to redesign your web site first come up with a roadmap detailing where you are now, where you want to be, and how to get there. The smaller the iterative steps are on the way to a complete redesign, the less impact they will have. Instead of unveiling a web site redesign all at once, tweak, tune and change it over a few months, giving your audience and Google time to keep up and get comfortable with the changes. Smaller, iterative changes to a web site will give web designers and developers a continuous feedback loop useful for pushing the redesign in the right direction.