For as long as I’ve been doing web design and development I must confess that this was my first year attending the famed SXSW festival. My cohorts at Pelago are all SXSW veterans and were willing to drag me along as their token noob, so I jumped at the chance to finally go and see for myself what all the buzz is about. I was not disappointed. SXSW was an amazing experience and I look forward to returning again next year.

Over the next few weeks I’ll be sharing in-depth accounts from the more interesting and relevant panels I attended. But, first I’d like to just share some random thoughts and experiences from my first time in Austin, Texas and attending SXSW.

I’m a wanderer at heart and love exploring the side streets in a new town. Austin, Texas did not let me down. It was tough finding the time — with all of the great panels and workshops going on — to wander about aimlessly long enough to soak in the real and gritty areas of downtown Austin. I decided to skip a panel, throw on my backpack, and venture out past the SXSW blast radius, past the hordes of badges crowding the sidewalks.

I went to Mellow Johnny’s to check out the Trek Madones and browse through the hundreds of bikes on display from the bike huggers social, chained up to every nearby parking meter, chainlink fence and railing. I also found tiny outdoor bar cleverly named the Tiniest Bar in Texas that had more local charm in it’s dirt patio than any place I would experience on the entire trip. The outlying boundary of my walkabout was the Whole Foods flagship market where I spent far too much time inside the beer cave rummaging through local beers — bought the Full Moon Pale Rye Ale from Real Ale Brewing Company and the Freestyle Wheat Beer from Independence Brewing Company. I only saw a fraction of Austin, but I highly recommend taking time out of your busy SXSW schedule to explore the fringes of a town already considered to be on the fringe.

The first thing I learned about SXSW is you have to pick your panels wisely. Read the description several times, research the panelists, and choose a plan B panel. My coworkers could not stress this enough before I went, and I later regretted not heeding their advice. Yeah, I’m saying there were some panels that were duds, as if they put more creativity and thought into the title of the panel than the content and presentation itself. After settling into my first few dud panels — gauged by the percentage of attendees participating in mass exodus — I soon learned to have a backup panel nearby. If you can’t find another panel, or you just want to wait out the current panel, use the time to catch up on email or network with the people sitting around you. The cool thing about SXSW is that there is always something going on.

Couldn’t this Interactive Festival Be a Little Bit More… Interactive?

My troubles with the interactivity of SXSW began weeks before the actual festival, when the iPhone app was launched. We can all agree the app was a dismal failure (unusable during the festival), however, the guys who built the app did a great job explaining why, and in my opinion, all is forgiven. Anyways, it wasn’t just the iPhone app. The WiFi network was highly available, but saturated by the sheer volume of laptops and smartphones. The network would slow to a crawl at the same time the panels would fill up. And our poor hotel staff across the street had no idea what to do with their free WiFi being slammed. I expected WiFi problems at the hotel, but given the number of wireless antennas I saw in every nook of the conference center I expected the SXSW WiFi to perform a little better. The SXSW panelists did do a great job of utilizing the Twitter hash tags for increasing the channels of interactivity during the presentations. It was a great use of Twitter and especially great for introverts like me who are never going to get up in front of a microphone. But filling out panel reviews on a 4×6 card? Where is the interactivity in that? And how much more feedback would SXSW have received if they had incorporated some type of online survey tied into the hashtag for each panel? For an interactive design and development festival the content and presentations were excellent. The festival itself, however, has some catching up to do.

To Party or Not To Party 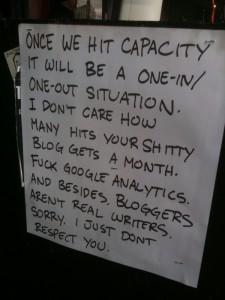 Let’s just start out by saying I am not the partying type. I’m a 35-year-old web designer and developer, a father of two boys, and I’m usually in bed by 10pm. And, being an introvert, I’m not one to wait in long lines only to cram myself into a room so full of people and music that I can’t hear myself think. However, being on the lam from all parental responsibilities did make me want to explore the night life in Austin, Texas. Regardless of your threshold for crowds, there seems to be a place for every type of personality — from the hotel bar to the high profile-after parties. We found ourselves settling in at The Ginger Man where we could have just about any beer on tap we wanted. They even had cask-condiitioned local microbrews (it just doesn’t get much better than that). Each night was a different adventure in discovering new food and drink, sometimes followed up by a spirited debate on some obscure technological advancement and its relevance to both past, modern and post modern culture. Yeah, I guess none of us were really the big party types before SXSW and we still aren’t afterwards. But for those of you who love the big parties, Austin had plenty of them. Getting into them is up to you to figure out.