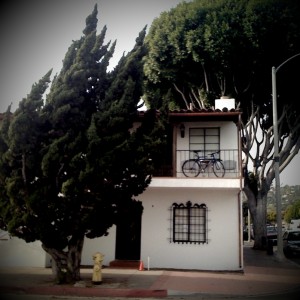 We recently moved our Pelago office to some new digs. As we prepared for the move we challenged ourselves to think of ways we could reduce our energy consumption in our new space. We were able to make quite a few improvements to our office environment, resulting in less energy usage. Some of these updates are easy enough to implement, while others would require working with a contractor (and the permission of your landlord, of course). We were fortunate that our new offices are in a recently renovated building and we were able to work closely with the contractor to implement several aesthetic and cost-saving features.

The first thing we did was reduce the number of computers in our office. We had a few older computers still hooked up to monitors that we were using for testing. We donated the older machines and optimized our current ones. We modified the power settings on our current computers to conserve energy as much as possible by going into sleep mode and turning off the display when not in use. By managing power settings better and reducing the number of computers, our off-peak power consumption has been limited to just enough phantom power to keep the computers in standby mode.

Gigabit switches are purported to be less consumptive then their megabit predecessors. And they are a lot faster. By replacing our switches we gained a significant speed increase over our LAN while also using less power. It’s a win-win. 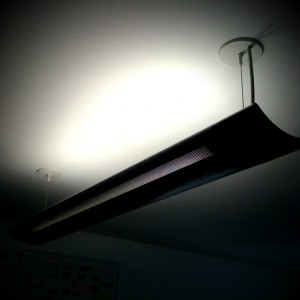 Instead of recessed halogens our new office has minimalist fluorescent lamps hanging from the ceiling. These lamps use T5 fluorescent bulbs, a popular energy-efficiency alternative due to their potential to cut energy use by more than 60%. 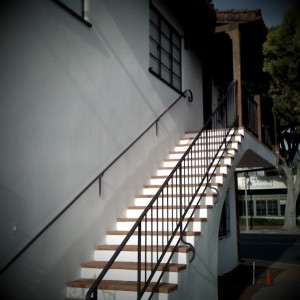 Our original office space was a gorgeous loft above an enclosed courtyard. But it had one major flaw. The southwest facing wall was composed entirely of windows. The light was elegant, the type of light photographers dream of capturing. The light was also searing. Our office would overheat, especially in the winter months when the sun would slink low on the horizon. We had to keep the AC going to keep our computers and servers from overheating. Our new office has windows on all sides which helps the keep a breeze running through on hotter days. And the window-to-wall ratio is better. We get just the right amount of natural light while keeping the heat out and haven’t had to turn the AC on once yet.

Our new office has a dedicated server room. It’s a closet we converted by ducting it with AC vents, installing a fan, and deadbolting the door. By keeping our servers in this separate room we can control the temperature more precisely, cooling down the servers without having to cool down the entire office. Servers run optimally at temperatures we humans find uncomfortable. Now we can keep both happy.

AC and Heat where they matter the most 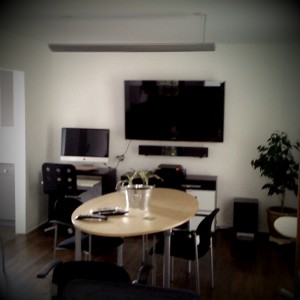 Composed of two rooms joined by a hallway, our office has different temperature needs for each room. We work mostly in the back room, so it’s more important that the AC and heat be directed there. Whereas the front room faces the sun differently and generally needs less climate control. Working with the AC installer we were able to dampen the vents in each room. We also programmed the thermostat to only monitor the room temperature during working hours. We now control how often and how much AC and heat is applied to each room.

Perhaps one of our biggest energy improvements is one that we are still in the midst of executing. As a company that builds web-based applications it is important for us to have multiple combinations of OSes and browsers. We need to be able to test our web-based software across all possible scenarios our customers may encounter. And when a customer reports a bug we need to be able to replicate their working environment. Rather than have a machine for each scenario, we’ve virtualized each combination. Now we can any number of scenarios from our desktops.

Easy enough, right? But what about servers? This is where we are headed next. We have several servers in our office for handling all aspects of designing and developing web-based software. All of those servers can be replaced with one rack-mounted Virtual Machine Server. The beauty of such a solution is that we can set up as many Virtual Machines as we need. Not only will we have removed the hardware limitations of using one physical device per server, but one server will use far less energy than its multiple counterparts.