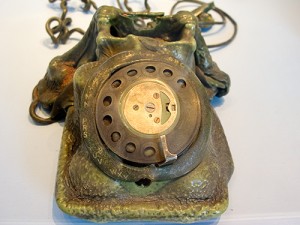 Today I am writing from our new Pelago offices. We moved in here over the weekend. Almost every aspect of our move went well, except one. We lost our phones. In our dealings with Verizon, our account got dropped, so to speak. So what exactly happened? The story I’m about to tell is unbelievable, but also telling of how behemoths like Verizon simply aren’t structured to provide good customer service.

Knowing our exact move date we decided to schedule the transfer of phone service to the new building four weeks out. We knew that since it was a new building we would need to have electricians and Verizon techs on site, so we made sure the rep reserved the tech. We were all set. No problem, right?

Nope. The phone rep had signed us up for Verizon long distance without asking us. The third party verification alerted us to this, so we declined the verification. Calling back to rectify the issue we had to explain the situation all over again to a new rep. This second rep told us that since we were leaving everything the same we would not need third party verification. Great! We were back on track and we still had four weeks left.

With only a few days left until the move, we called Verizon again to verify the transfer. It is really quite annoying that every time we would call we would get a different rep and it would take several minutes to get them up to speed with our account as they dug up the details from the annals of their computer system. Ah, yes. Transfer is confirmed. We’re all set. The Verizon tech will be there between 8am and noon the morning of the move.

The Day of the Move

At 7:58am we verified our order online. The status of the order was “on schedule.” Sounded good.

At 8:15am we spoke with our electrician to let them know Verizon would be on site soon and would need help with the phone lines. They cringed (a sign?) but said yeah, they’d be there. Great. Everything is lining up. Before we knew it, noon had arrived and there was no sign of the tech. Hmm. Time to call Verizon and find out what is going on.

At 12:17pm We called Verizon and got another random rep up to date on our situation. After calling up our records we were informed that our order was on hold because we did not complete third party verification. Huh? The online status said nothing about being on hold, and the rep we spoke to four weeks ago said we didn’t require third party verification. This rep said they would expedite the order and call us back with a status update.

At 4:57pm we were still waiting for that status update. So instead of waiting any longer, we decided to call back. After the mandatory five or ten minutes of “getting to know your account” the rep informed us that the tech indeed arrived at 8:30am and, because it was a new building, did not see the wiring in place needed to set up the phone lines. Being that it was no longer his direct responsibility, the tech made a note in his file and moved along to whatever was on schedule next, which I’m guessing was an early and extended lunch.

The tech just left? Despite us having informed them four weeks in advance that the electrician would be on site to help run the lines through the conduit. Despite having made a special request to reserve the tech for the morning to help get the lines into the building. Despite there being contractors crawling all over the building, any one of whom would have pointed him at an electrician who would help. Despite us having given our cell phone number to call when they arrived or should there be any problems. The tech just left.

Obviously, Verizon screwed up. We called again, got another rep to look into our account, and explained our predicament. Their response? We can get another tech out in ten days. So they screw up and the best they can do is ten days? But it’s the holidays, says the rep. Yeah, that’s why we scheduled it four weeks in advance and did everything in our power to make sure everyone was in place.

Not willing to do much more for us, we decided to cancel our Verizon phone service. Complaining isn’t going to help any because, as we found out, communications with one rep doesn’t make it past them unless it is typed into a computer. And what good is a footnote on our account saying we are unhappy with their service? So we cancelled. They offered us $100 or something silly like that to come back, which only further underscored how much they don’t get how important it is for their customers to actually have a working phone line.

In retrospect it is quite clear what happened. Verizon is a giant company with hundreds of thousands of employees spread throughout the world. They may not have begun the concept Bureaucracy, but they are doing more than their share of keeping it alive and well. Simply put, each person at that company doesn’t see how their role effects anyone outside their personal sphere of influence. There isn’t any incentive for any one person to go above and beyond their own job requirement, which leads to the communication breakdown we experienced.

The reps we spoke to on the phone and the tech who came out to our office had a computer and a clipboard in front of them which was the extent of their relationship with Pelago, a small business on Santa Barbara’s East Side. And this is a problem for large businesses. There is ain infectious myopia that seeps into employees when companies grow to the point where their product offering becomes synonymous with the customer. It becomes incredibly difficult to see past their personal responsibility to the product and take into account the customer who uses their product.

I’m not sure who is at fault, the individuals or the company. But I would lean towards the latter. The big business has a responsibility to its customers that must be met at all levels of the company, but it’s the lowest levels where incentive to accommodate the customer is absent. The CEOs might be making a killing, but they are leaving a slough of angry customers in their wake.

Small business have a lot to learn from the customer service failures of larger business. Probably the most important lesson we have learned is to stay small, while also keeping customer service a top priority. It is inevitable that with great growth comes great miscommunication, something even the fastest growing businesses out there will struggle to overcome.

In the meanwhile, we’ve cancelled our Verizon account. They simply don’t deserve our business. Being that we’re a company that builds web-based applications, it makes more sense that we upgrade our phone technology. We’re having IP phones installed this week, from a company with far better customer service.

6 Responses to “Customer Service: One Good Reason Why Small Businesses Should Stay Small”